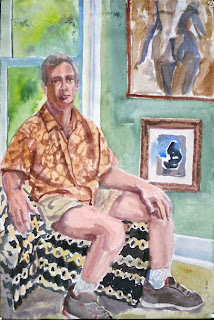 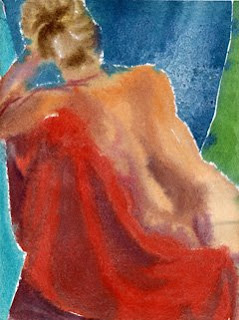 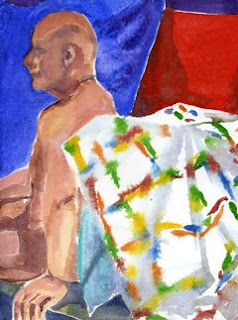 Seated Man with Fabric
Watercolor on Masa Paper
10.5×7.5″
This is the same fabric I used for the Teapot watercolor paintings in previous posts. I have gotten a lot of mileage out of it. It has the color and white areas in ideal distributions so it is a favorite.
T F m 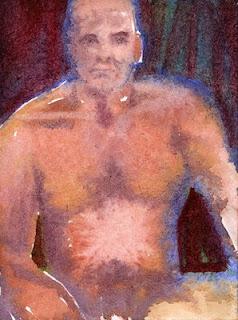 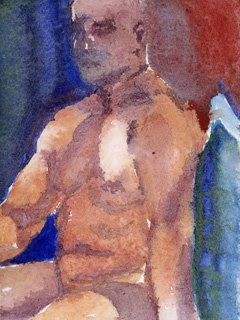 The Naked and the Clothed 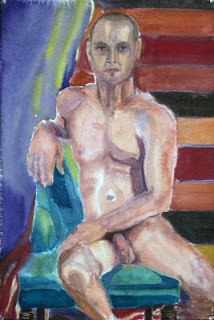 The number of women who come to model for our group greatly exceeds the number of men. That’s unfortunate. The men are as artistically appealing as the women. These naked boys can be very inspiring.

Besides that, I firmly believe in equal opportunity nudity. Nude and nearly nude women are plastered all over the place. It’s time the boys showed their stuff and exposed themselves with the same kind of vulnerability.

How often have we see images of nude women surrounded by fully clothed men in both the fine arts and pop culture? That situation only exaggerates the the power difference between the naked and the clothed. There is no reason the boys should be exempt from this treatment. 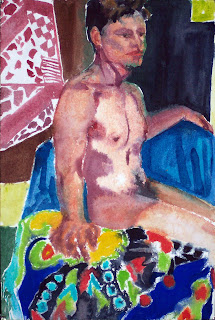 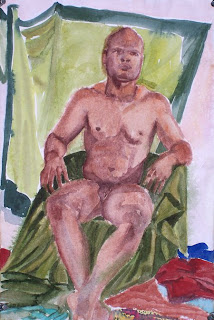 It is a shame that saving images for the web leaves them somewhat pallid. The color is so important to me. I always try to capture a certain luminosity which, when I do, never seems to come across on the web. So be aware that these images are much more color saturated than they appear.
T F m 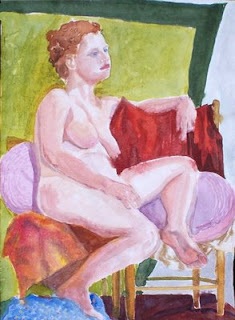 Caitlin is another model whose intelligence sparkles. She is not bothered a bit by our group’s chattiness. In fact she chimes right in when she wants to and usually contributes positively. We have no problem with that. We want our models to be entertained while we all work. It’s part of the social aspect of our gathering to make art. 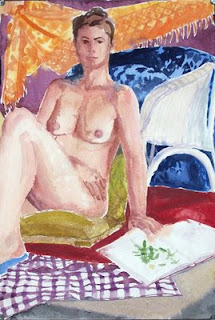 This young woman was on a spiritual quest. She had changed her name to Aquarius because during a meditation her spirit guide spoke to her and advised it. This was all a little airy-fairy, new-agey to me but, to each her own. She was, never the less, a bright presence as a model. Her spirit guide also told her to move to Seattle because it was the right place for her to be. She would never come back to model again.

I quite frankly don’t care what anyone’s religious beliefs are as long as they are not imposed upon me.