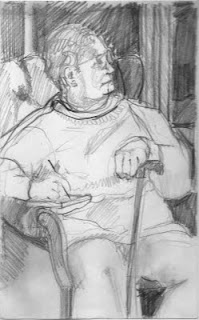 This was done at an annual painting trip in Wisconsin. This year was my twentieth year. We have critique sessions at the end of each day. I always bring my sketch book to keep busy while we discuss lots of work. This lady was a regular. I just heard that she had recently died. So this is in memorium to Dee. 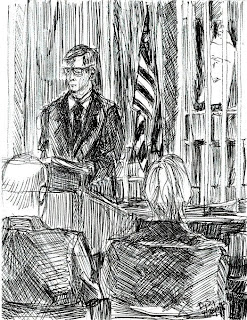 Yesterday was Yom Kippur the most significant holiday on the Jewish calendar. I was at the morning service and I sketched this of the rabbi while he was sermonizing. I listened as I sketched.

Mugs of the Masters, Continued 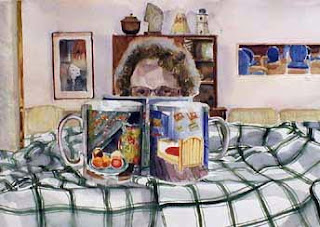 Self-Portrait with Vincent & Paul
Watercolor on Rag Paper, 16×20″
www.davida-art.com
This was done in my last house. This is the shelf on a mirror hall piece that is framed in brass. You can see reflections into a part of the house with my artwork on the walls. The mugs have reproductions of a still life of Cezanne’s and one of the bedrooms paintings of Van Gogh. I am there too because this was painted from observation. The mugs obscure my face particularly my mouth. It’s about the silencing of artists, both women and men, by the corrupt and selective character of art history or social constraints or anything that might keep an artist from sharing work with an audience.
T F m

We’ve had a big change in the weather. A cold front came through yesterday. It’s a portent of things to come. This piece was done after an atypical Chicago snowstorm. We have had a period of mild winters with much freezing rain and little snow. This was a break in the pattern. Our town has a public golf course and I went to the club house and painted this through the picture windows. I was nice and warm while outside it was a blanket of cold and snow.

The golf course is open in the winter for cross country skiing so there were some people going in and out of the club house happy in being able to ski. Our last two winters seem to have returned to their usual severity. We are back on the track to winters as character builders.

We have had lots of snow with repeated freezing and thawing in just the right sequence to render roads in such terrible shape to create all kinds of havoc. There is now just enough repair going on to make the roads survive the next onslaught. I will have to brace myself. Damn it!

A Much Longer Drive

This was done after I had given a 3-day workshop in Valentine Nebraska. My art buddy and I decided to take a slow trip back and stop to paint on the way. This was one of the stops. 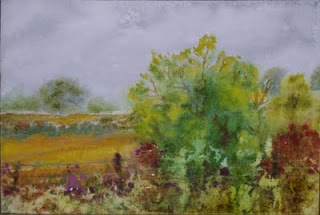 I have had two pieces of work accepted to a show called Interpretations of the Figure. The show is at the University of Indianapolis. So I packed the trusty old min-van and walked out the door yesterday morning at 6:30am and drove to Indianapolis. I delivered my work about noon and turned right around for the trip home.

It was raining, drizzling or fogging most of the drive but there were times when it stopped and visibility improved. The countryside was beautiful! The colors of autumn are just beginning to show. The corn fields are a mix of brilliant green with pale yellow and gold. The soy bean fields are a golden ochre with a hint luminous of orange. The sumac at the side of the road is red and the last purple blooms of what looked like phlox are at their peak. I took all this in at just a little over 70mph.

When I got home at 4:30pm, I immediately painted this from bits and piece of my memory. Nothing could actually capture what I saw but I did my best. 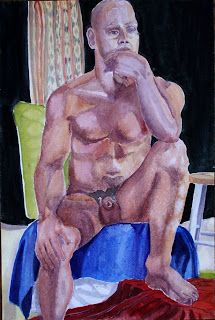 I don’t what it is but the men just have to do some variation of Rodan’s Thinker pose. It has become such a cliche. In spit of that this turned out OK. Enough said!

Figure Painting Is Still My Thing 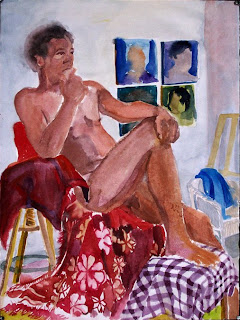 This was done just before the Ravenswood Art Walk during Chicago Artists Month. That’s why there are paintings on the wall behind the model. The following week all the studios in the building were opened to visitors. And since Ravenswood Ave. is lined with studio buildings, it was quite busy. When I was a student (long, long, ago) you could count the number of professional galleries (all of them just east of Michigan Ave.) on the fingers of one hand and have some left over for a few artist run spaces. That has changed enormously. There are artists and galleries all over the city and suburbs. We still held our session (in Eleanor Spiess-Ferris‘ studio) with a clothed model. People walked in an out of the studios the entire two days of the event.
T F m 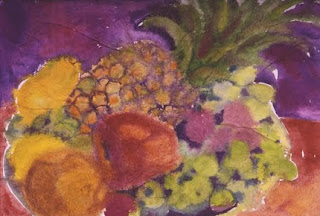 This is a pretty straightforward still life of fruit which demonstrates the how masa paper can provide soft edges when wet and more details as the paper dries. You can see the detail in the pineapple and the soft edges of the rest of the fruit. I made the background different temperatures of violet because of yellowness of the fruit is dominant.
T F m

Mugs of the Masters, Continued

This another Mugs of the Masters painting. The mug has a reproduction of one of De Chirico’s metaphysical paintings. I have two of my watercolors of male nudes in the background. I think the men should now get the same treatment women have been receiving from them for centuries—naked, exposed and vulnerable. I have the signs of my vocation in the form of a paint jar and paint tube. To the left is a picture of my hubby asleep. He seems to be asleep at awkward times. A friend of mine noted that all the vessels are empty. I have been wondering if that means anything. “Sometimes a cigar is just a cigar.” Thank you, Sigmund.
T F m