I thought I was leaving for Illinois State this morning but there has been a change in plans so I can make a post today. But the next 2 days will be post-less.

This a second study for the soffit mural. It is the image for the far right end of the right panel. It is the destination.

I will not be posting for the next 2 days as I will be out of town. I have been nominated as distinguished alumna of the college of art at my alma mater, Illinois State University. So I am going to bask in a little glory.

This tiny study was for a much bigger project for a watercolor to be place over a window or soffet. The final piece measured 1×15 feet. So it was long and narrow. I used 140# cold pressed paper from a roll and stapled it to two 1x12x84 inch planks and placed them across several chairs to work on both from where they met at the center to the left and right edges. These studies are tiny by comparison but proportionate to the final piece. The finished piece will follow but in chunks because it is too long to adequately be seen on a computer screen

This was done in two locations. It was begun on a road right on Lake Michigan in front of a house with white picket fences. It was thick and dark with cedar trees. The morning started out pleasantly but within an hour and a half a palpable weather front came through that sent paints, brushes, palettes, and other painting supplies flying. The temperature dropped about 15 degrees in as many minutes. So I packed up and planned on finishing later. No such luck. It was rainy and cold for the rest on my stay. When I returned several weeks later to finish the picket fences were gone! It was the contrast of the white against the dark of the cedar trees that had attracted in the first place and now the fence was of a material that blended in with the trees. So I ended up going home to finish this in my back yard and making up part of the fencing in the process. 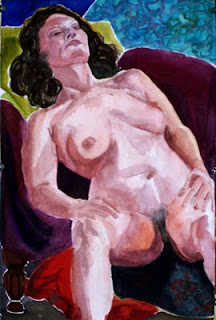 I have shown my nude self-portraits but I am such an unconventional nude that it seemed OK conceptually. This is another category. I have always objected to the blatant debasement of the female body by using it to sell tools, cars, war, or whatever. Our society is obsessed with sex. Whether it is ranting against anything remotely sexual or engaging in obsessive sexual curiosity that any image of a nude figure is automatically characterized as ‘dirty’.

We artists who are dedicated to figure drawing and painting know otherwise so I am posting this to be a little transgressive. 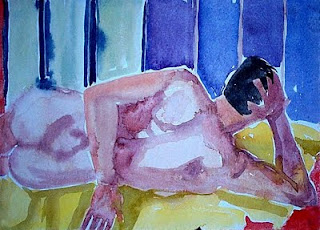 As the titles imply this model is the king of the quick pose. He can twist himself into a pretzel if he chooses. Since holding a pretzel pose is difficult, working fast is mandatory. This was done at lightening speed: 10 minutes or less. Whew! 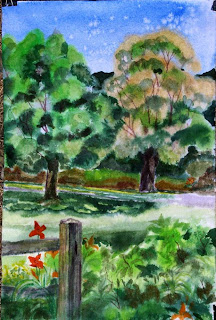 This was done at a plein aire festival and I gave it to a dear friend who was having a significant wedding anniversary. I presented it to her in a white, rag archival mat ready for a standard sized frame. I think her framer talked her into swapping my mat for a green mat. I don’t think it’s archival but the colored mat does nothing for the painting. In fact it seems to drain all the color from it. I gave it to her so I no longer have control over it.

Please people if you have a piece of artwork, stay away from colored mats. The framers love to sell you fancy mats because they make a lot of money from them. 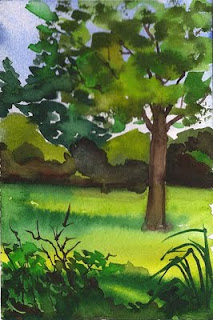 This is a clearing in a local forest preserve. The Chicago area is ringed by forest preserves. They are wooded parks. There are clearings like this for picnics and for hiking on wooded trails. They are adjacent to the streams around here to keep the flood plains from development. It’s pretty foolish to build on flood plains but it has been done before. A lot of the wetlands around here have been recently restored as well to further protect against flooding. 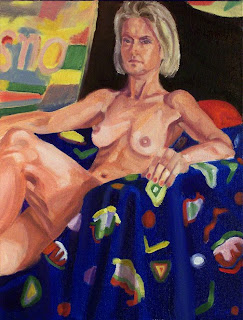 This woman reminded me of an actress who was active during the ’60s and ’70s named Dina Merrill. She has very similar bone structure and coloring. It’s unfortunate that it’s so difficult to hold smile because she had a smile that just lit up her face. She seemed like a different person when she flashed a smile.

P.S. The Ravenswood Art Walk is on this weekend. It’s a nice way to spend a Sunday. 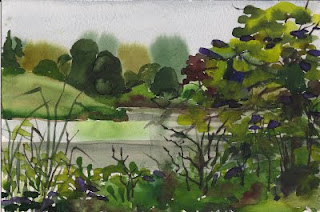 This was done at the Chicago Botanic Gardens on an overcast, humid day. There are ponds with islands in them on which different kinds of gardens have been constructed. On one of the islands is a Japanese Garden; there is an Enabling Garden so those with disabilities can enjoy hands-on gardening. There is an English walled garden that is one of my favorites because there are so many painting vantage points. A new water garden has just been constructed along with a prairie garden made to re-created the environment of Illinois from nearly 2 centuries ago. It’s a must place for any visitor to Chicago.

It was so humid, all I did was paint and the sweat was running down my face. The temperature wasn’t that high but the watercolors took a long time to dry.