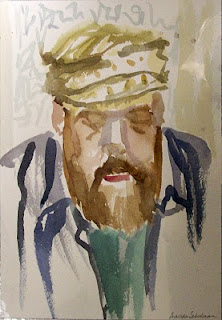 This is a very fast watercolor (under ten minutes) of a PHD candidate in philosophy. He worked at night in a nursing home while he was doing his research for his dissertation. I thought a portrait of a philosopher would be appropriate at the threshold of the new year. We tend to make resolutions we will not keep so I think a little philosophical reflection might be in order at least for me. I need to make resolutions that are at least within reasonable expectations. I am not listing them. I am not going to share my mishigas.

I am cooking this evening for friends and I will take some pictures of my culinary creations and post them tomorrow. Happy New Year to all. 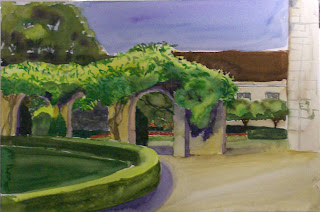 My reminiscence for France continues. This is an arbor at the rear of Chartres Cathedral. It was a lovely sunny day and I decided to take some time there to paint this watercolor. My watercolor field kit comes with me when ever I go on vacation. I like to paint right on the spot. Photographs as references for later painting are unsatisfying. One tends to become slavish to them and the color is decidedly inadequate. So my camera stays out of it. I wish I could spend a month in the same locale and just paint. I love to nose around and become familiar with a place. Vacations usually don’t allow for that kind of leisure. We rush around trying to see as much as possible in a short time and then we really see nothing at all. 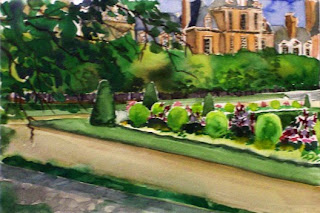 I am nostalgic over a trip to France my husband and I took during the heat wave of 2003. We took a trip to Versailles and it was grand and very crowded. However the real sleeper of the trip was the trip Fontainebleu. It was located in a beautiful little town and their were no crowds. You could very leisurely go through its vastness and enjoy its beauty without the press of people all around. I was great. I want to go baaack! (That’s to indicate my whiny tone)

Once and Future Office 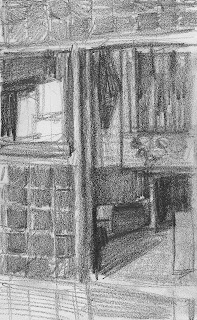 This was my office at the second campus of my college. I say was because it has been taken from the art department and given to another teaching discipline. We have the least space of any community college art department in our region and our office’s partial function was art storage.
I am told I can use the common adjunct faculty office but all I have to do is roll in there with a stack of charcoal drawings and it would be all over. Why is the art department the first to sacrifice when there is a squabble over space? That’s my morning kvetch. 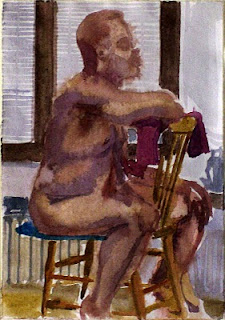 This man was a shoe designer. The fact that he was modeling to supplement his income is a hint at his success in that area. Though I should not be so judgemental. He may have enjoyed modeling enough to continue doing it. His shoes were so outlandish all I could think of when I saw his designs was “Ouch!” I guess that means I am old. I won’t sacrifice comfort by enduring the pain of ‘cute shoes’.

This is a version of a previously posted watercolor painting done in oil paint. Which do you prefer? 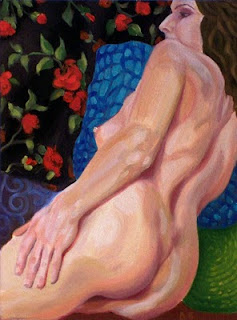 I am a sucker for pattern and color. I have stated that before on this blog. None of the pattern in this painting was actually there. I either invented it or got it from another source in the room. The only pattern that was actually there for me to see was the black fabric with the rose pattern and that wasn’t behind her at all. The rest of the patterns are either invented or adapted. For instance the green cushion to the lower right was actually pale pink but pink wouldn’t have set off the skin tones of the figure so I made it green. The blue plaid cushion was actually a solid dark maroon that contrasted too weakly with the black fabric. So, I made that turquoise with blue violet. The curly ques on the left adjacent to her hand are a complete invention. 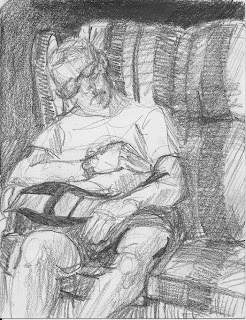 My husband will not sit for a sketch, a watercolor, or painting. There is no cajoling that will convince him. The best I can do is catch him when he is sleeping. He is a very early riser so when 7:30pm rolls around he’s done for the day and usually falls asleep where he is at that moment. This one of those moments. He’d had a hard day doing things around the house. 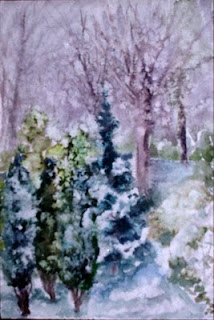 This what it looks like around here. Now we’re expecting rain on top of that. There are flash flood warnings out too. I have to go out and clear a drain on the side of my house or the water will collect into Lake Schulman. That’s my weather whine for the day. I am sure there will be a few more between now and May. So be prepared. 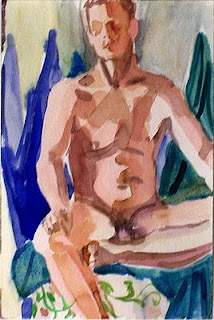 This man has been modeling for years. He has a very boyish look despite being in his 50s. He is always chatting and once when weather made me late to my second class he actually stepped in and got the class going. He’s been modeling in for the colleges for so long he knows the drill very well.