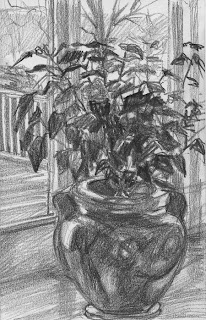 It has been pretty cold here but Friday we actually had some sunshine. In winter that usually means it will be colder. We get so few days with sunshine during the winter that any time the sun is out it is just fine with me in spite of the cold. I keep my patio doors with the blinds up all winter. The light is good for me as well as for my hibiscus plants. They are actually growing a bit now that they used to the lower light levels. With the end of January we now have only seven weeks left of winter. That’s astronomically. The actuality is another story.

Self-Portrait with Magritte
Acrylic on Canvas, 48×36″

This is a self-portrait that is an observed mirror image. I have even included the beveled edges and the broken character of the image within them. On the mirror I stuck a postcard image of a Magritte titled Rape. It is a female torso that doubles as a head and shoulders portrait of a woman. I have used postcards like this in the past to have a discussion with art history. I intend to continue doing so but in what context? I am not sure.

I am uncertain as to what Magritte’s attitude towards women was, but this doesn’t communicate any great respect for women as persons to me. Has anyone done a little research on this painting? I’d love to hear from you. 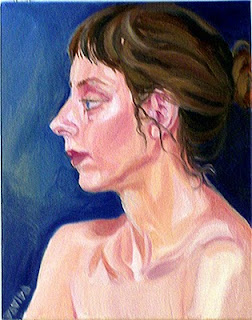 This profile portrait is of a young woman whose attractiveness is similar to that of the of Sargent’s portrait of Madame X. She has a similar nose and very languid blue eyes. It is an elusive look. One second I think I’ve got her and the next it’s gone. It’s the nature of portraiture. Sargent used to say, ” A portrait is a painting in which something isn’t quite right around the mouth.”

That “isn’t quite right” extends to all painting. It’s never quite right. It’s only as good as it is going to get. Recognizing that can save one a lot of grief. 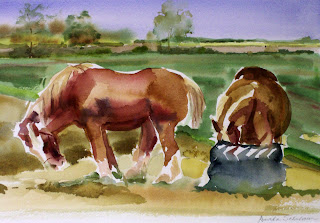 I spent a day on a farm with Belgian draft horses. The owner raises these mammoth horses. Their hooves measure around 12″ in diameter. He said I could hang out at the farm to paint. He was grooming one of these extraordinary horses in a corral marked off by a single strand of knitting yarn. This very powerful animal willingly allowed himself to be confined by a fine thread.

This painting is of a mare in another corral who moved around a lot. Funny how animals won’t sit still for a portrait! I had to paint fast before the next move. I painted her twice in the same painting. I am very pleased by the spatial depth in the background. 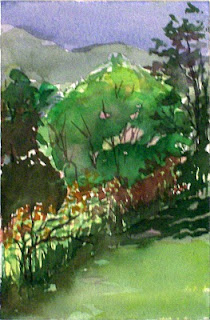 This was in a sculpture park along the north branch of the Chicago River. I was conducting a watercolor class and I painted while my students painted. I did it to keep from hovering. If I don’t find something to do while my classes are working I find that I interfere with too much advice. There is a fine line between being helpful and just being a pain in the ass. 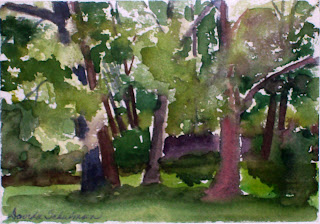 Although the Chicago area is beset by urban sprawl, there are pockets left untouched. These forest preserves have been left in place to help maintain viable flood plains along the rivers. All are well used in the summer for picnics and cyclers and ball players and walkers on the forest paths. There is always pressure to chip away at the land reserved for forest. But there is hope. There have been significant restoration to retore wetlands to prevent flooding and the results have been spectacular.

This is a one of only two self-portraits I have done on masa paper. I am not very happy with it. I don’t think I have a likeness. This is my last self-portrait. The concept is going cold on me and I have to move on. I have been at a loss as to where my serious work will go. Stay tuned… 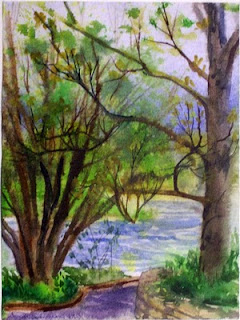 This is another image form the Botanic Gardens of the Chicago Horticultural Society. During the summer I like to visit often. I have even conducted painting classes there. This is a path along one of the lagoons in the gardens. 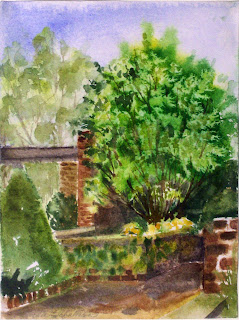 This a view in the Helping Garden of the Chicago Botanic Gardens. It is designed for those people who have some physical handicap. The beds are raised for those in wheel chairs or the textures are very distinct for the visually impaired, etc. This has all been done to allow gardening to be enjoyed by all.

A trick every watercolorist knows: salt. The leaves of the tree were formed by sprinkling a little salt into the wet wash. 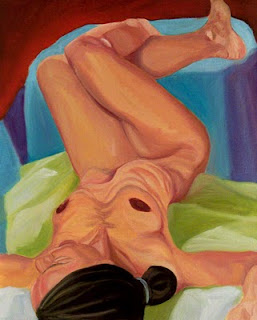 This one of those difficult foreshortened views of our model. We moved our model stand out into the center of the room because we had a few members asking for a back. It really didn’t work out that way. We ended up with this reclining pose. I think this is the most challenging view.