Letihia modeled for us last week but only for a single session. She had to miss her previously scheduled session because of illness. She took a pose so similar to another one from last year that I decided to repeat a checkered pattern in reference to that painting. It’s amazing how much you can get done in one session when you know that will be it for that painting and no more. It also helps that this is small. 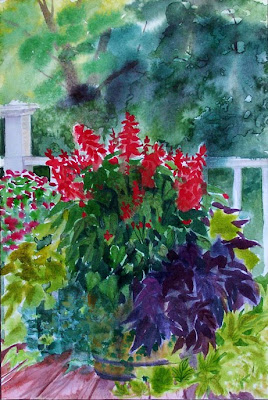 The summer has only three weeks left astronomically. Mother Nature is putting on a grand finale with the vegetative lushness of a high order. My containers are insanely beautiful. I have nurtured them by feeding them regularly and by watering them twice a day on very hot days and daily on not so hot days. I have created my own subject a la Monet on a tiny scale. This pot is one of the insanely best. The sweet potato vine has ringed the pot, the salvia is in its third blooming (thanks to dead-heading the old blooms) and everything has cascaded down the side to obscure pot. I think my thumb is turning green. 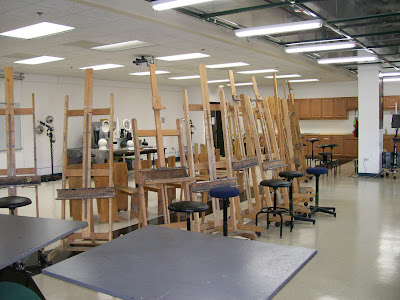 Classes began at my college last Monday. This is a new classroom for the art department. This is my classroom every Monday and Wednesday morning. The room accommodates all the drawing and painting classes (on this campus) plus workshops for art organizations and any of the adult continuing education classes. It is a room of beauty and a joy to behold! At around 20% larger than our last room and 300% larger than our original classroom, to me, it is a palace! My furniture moving will hopefully be reduced by half. Yay! I even have a digital projector on the ceiling for showing examples of work for each assignment. No slides. No cumbersome equipment to be brought to the room. This is probably the last time I will see it this pristine, but I still think I’m in heaven. 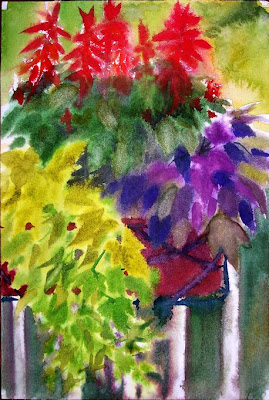 Deck Rail Container
Watercolor on Masa Paper
15×10.5″
I have been busy schlepping the entire contents of my studio to my future home and my hubby and I are nearly done—only the big paintings remain to be moved. I have left only a watercolor kit a small easel, a small portfolio for storing the watercolors I do here, and some water mixable oils with some archival panels. There is still more to move and we will continue to move stuff while there is no wintry weather to contend with. Then our moving trailer will be stored until spring. Besides all the moving, school has begun and I will be teaching during the week as well as seeing to my elderly mother and whatever else pops onto the horizon.
I hate not being able to devote time to painting. The day isn’t right without it. I squeaked this one in on Sunday. It was a beautiful day with very pleasant temperatures and lower humidity. We have been gobsmacked with extraordinarily high dew points. I have never experienced such humid conditions in all the time I have lived in the Chicago area and that’s all my life. (Humid summers are normal here but this has been extreme.) Since I am a geeza (that’s the feminine form of geezer) that’s a loooong time.
I think I can make one or two more paintings this week. It will sure make the week feel right if I do.

There is an alumni show coming up to celebrate the Fortieth Anniversary of the College of Art at Illinois State University and I will have this piece in the show. More on that later.

An Olympia of Our Own

On the Fainting Couch
Oil on Panel, 16×20″
One of our Saturday studio mates found a chaise lounge put out for the trash. Since it was in fine shape, he snatched it up for our Saturday sessions. It doesn’t have quite the over-the-top ornamentation of a Victorian piece but close to it. We are thrilled to have our very own Olympia fainting couch! This model made very good use of it and it will be seen in paintings to come. I only wish the internet could convey the true color of this painting. What appears black in the upper left is actually a deep blue violet.
Olympia was a painting that created a near riot when it was first shown at the Paris salon. It had to be kept under close guard to prevent its being vandalized by some outraged member of the public. It seems a rather innocuous nude today. But the fact that the woman pictured was a contemporary woman and not an idealized depiction of some classical allegory or part of a mythologized historical event made it a scandal. To have a real woman confidently staring out at her viewer and not some sleeping Venus or other goddess who is looking away was a shocker to the viewer who might otherwise be comfortable as a voyeur looking at a naked woman who would be unaware of the looking.
The prudish nineteenth century is renowned for paintings of delectable nude women under the acceptable guise of classical or biblical mythology. It is in contradiction to the tightly laced-in middle and upper class women who were restricted by their mode of dress and their ability to move about in public. I think of the Martin Scorcese film, Age of Innocence, with its opening scene through the rooms of a lavish nineteenth century New York house with exactly the kind of paintings to which I refer and the very strict standard of respectability required of the characters of the story. In fact all the paintings are used as metaphors for the contradictions faced by them. The styles of the paintings represent ways of being in the world.
T F m