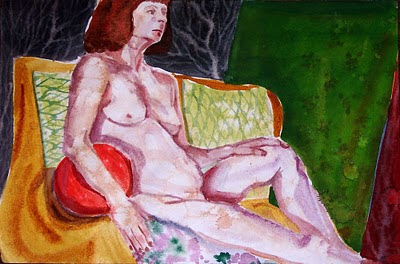 On the Yellow Throw
Watercolor on Masa Paper
10.5×15″
This is a watercolor that I just discovered and upon searching my record of images on this blog realized that I had never posted it. I haven’t painted the figure on masa for some time. I have been focusing on water mixable oils. I use water mixable oils because of allergic reactions to solvents both from me and my husband.  Enjoy!
T F m

Against the Fainting Couch
Oil on Linen Panel, 16×20″
I have been moving more things to my future home so we can prepare our current house for sale. We’ve been making quick trips by driving, unloading, spending the night, and driving back the next day. Today I was in the Saturday studio to begin a new figure painting. The model was a young woman we have had many times before and she was as beautiful as ever. But I would really like to have a male model for a change. I believe in equal opportunity nudity. The male body needs to be exposed nude with the same vulnerability as the female body.
The nude female body has its ideological issues because of the ubiquitous appearance of naked or nearly naked women in the media. I hope that I paint our women who model with a degree of dignity which counters the vulnerability of being unclothed.

This woman says that modeling for us is easy because she is so well entertained by our conversation. All our models are invited to chime in if they wish and she did. We like to know something of who the model is through conversation. It gives us a sense of the personality behind the appearance.

Some figure study groups demand silence from their members and their models. That has to make it quite dreary for the models. It sure is for the artists. I’ve worked with groups like that and I prefer conversation. We know how to shut up when it gets challenging. Besides this is a social activity for us as well as an artistic one. If one wants solitude one can stay in the studio!