Patterns,
Oil on Panel, 20×16″
This young woman has a square jaw and strong chin which emphasizes her beauty and gives her an exotic look. I don’t know if exotic is even the right word. My mother always says “We all look just like ourselves!” And so I guess she looks just like herself.

She is very tall, lean and strong. When I decided to portray her at this scale, I had to deal with the considerable space to each side of her. The idea for the patterns sprung out of that problem. The patterns were elsewhere in the room and small so I decided to make use of them by enlarging them and elaborating on them. It was a lot of fun! The trick was to control the values and the color temperature so that her image did not get overwhelmed by the patterns. I think it needs some spots and jots of a cool green to bring it to life, color wise. I’ll think about it.

Why Do I Do This To Myself?

Reclining
Oil on Panel, 8×8″
This is a reclining pose from directly in front of me. What a difficult position! I have done foreshortened views before. It seems that I have never done one from so direct a position. Why do I do this?!
It is a kind of awkward painting. The portrait came out OK but I am not please over all. I don’t know if it’s  the square panel or what. Maybe I’m just doing my own worst critic obsession routine. In the next few days I may not have any misgivings about this one.
This a one sitting piece. It had to be done in one session. If I had had a second session I might feel differently about it. Sometimes they workout and sometimes they don’t.
T F m 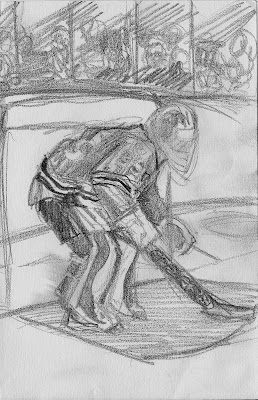 At the Ready
Graphite on Paper, 8×5″
My husband is a rabid hockey fan. It’s all my fault. I bought him a family pack of tickets to the Chicago Wolves for his birthday three years ago. (The Blackhawk tickets are just too expensive.) He took our sons and a close friend to the game. They had such a great time, all of them are now incorrigible hockey fanatics. They worship at the shrine of the Holy Hockey Puck.
My hubby will come home from a game and then watch Hockey on the Fly which includes clips of the game he had just seen. He records games for review later. He goes into mourning when the season is over. Such is the extent of his hockey addiction, he watches old games multiple times during the summer. He counts the days until the season begins again.
Now for the paradox. He’s also a committed opera fan. That came about, also, with a gifted ticket. He was given a ticket to see the final opera of Wagner’s Ring Cycle: Gotterdammerung. (Translation: God Damn Ring.) He went on his own not knowing anything about the plot or having heard anything of what came before in the preceding three operas. Well, he was swept away. He had to look into the history and summary of the plot and see those other operas in the cycle.

What makes this so extraordinary is that previous to these events, he wouldn’t have been caught dead in the same room with anything having to do with opera. He would say that he couldn’t stand that “catterwalling”. Now we have had season tickets to the Lyric Opera of Chicago for at least the last twelve seasons. We’ve even attended a complete Ring Cycle. (Four operas in five evenings) Go figure!

Our seats are in the lower upper nose bleed section but we enjoy it none the less. The following drawing was done before and between acts of the Mikado. The place is rich with art deco pattern. It has been  recently restored. My hubby was part of the electrical team running the new electrical work and lighting. 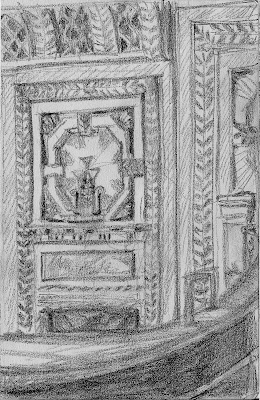 Last Figure of the Year

Here is a lovely young woman who loves to model for us. She appears in this painting. This is the last figure painting of 2010. I haven’t been to a Saturday session since December 11 when I finished this painting. I returned to paint today and just retrieved this. I am very pleased with her expression. It captures an air of contemplation. I am also please with the color effect of the strip of green which is just yellow enough to set off the violet shadows and just green enough to set off the redder tones. Neither the reds or the violets appear as saturated as they actually are on my computer screen. Maybe someone else’s screen makes the color appear differently. C’est la vie!