Shorn
Oil on Linen Panel, 20×16″
This is the same woman as the Pensive Woman from last January. She decided to shave her head as the mass of hair she had was becoming too difficult to maintain. It seems a rather extreme solution. At least she didn’t do it between our modeling sessions.
She has a beautifully shaped head and having no hair makes it all the more easy to see and paint. I am very satisfied with this piece. I think the foreshortened arm looks sculptural and muscular in keeping with the female model. The patterns are related to the two previous pieces so I think they make a series.
I am back and forth moving furniture and kitchen stuff over the Independence Day Holiday so no posts for a while unless I can squeeze a painting session between moving, holiday guests, and cooking. Have a capitol Fourth everyone!
T F m 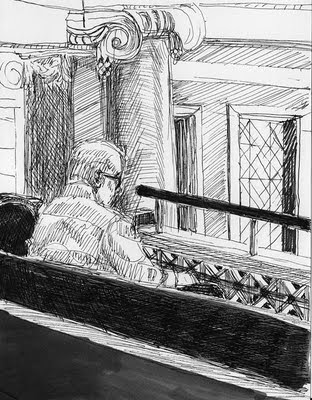 My husband and I went with our younger son and his sweetheart to a concert. It was a Handel oratorio entitled Resurrection. The religious subject matter doesn’t appeal to me, so, as not to be distracted by that with the libretto, I took out my sketch book and listened as I drew. I don’t think you can go wrong with Handel. The music was glorious. The singers were extraordinarily good.  I even heard phrases that he used for the Water Music or the Music for the Royal Fireworks.

The instruments were period and there were a few mishaps. The reeds for the wooden oboes and clarinets squeaked at a some crucial moments. My son’s honey is a classically trained pianist and she was very critical at that. My son in his funny way said, “Let’s go get ’em and slap ’em around a little!” I think that made her disappointment at a slightly less than perfect performance take on a more forgiving perspective.
The surroundings were also apt for the period of the music’s creation and for the subject matter of the work. The architecture of the concert hall was neo-classical in style and beautifully maintained. I think it was a church at one time. The pew seating was the give away.
This is another music lover enjoying the concert in the very conducive surroundings.
T F m

Janet of the Red Hair
Oil on Linen Panel, 20×16″
I just brought this home from the Saturday studio session. The final session with this beautiful woman was two weeks ago. I was away for last week’s session. I think this painting solidifies my firm belief that having two sessions with a one week interval is a very good way to work. This had an inauspicious start. I had the made the head too large and for some inexplicable reason, I was just unable to correct it.  The solution or, the look, just kept eluding me. The following week I walked into the studio and the solution presented itself to me immediately. Having not seen it or thinking of it for a week allowed me to see and comprehend what it needed. Then it was as if it had completed itself.
The only comparison I can make about that process is the tip-of-the-tongue moment when a name or fact cannot be brought to mind now matter how I concentrate my thoughts. Then hours later, without thinking, that tip-of-the-tongue item comes to me in a flash. With this painting it was a tip-of-the-brush flash.
I think that part of the problem is that Janet is so beautiful with her red hair and porcelain skin that I cared too much about the success of the painting. Caring too much dooms my painting to inevitable failure. I have to take my own advice, “Don’t give a shit and the paintings will come out great.” Well, great may be overstating it but, I think any of the painters and drawers reading this will know what I mean.
T F m

Sleeping Spot
Ballpoint Pen on Paper, 6×8″
I have been away for the Memorial Day weekend without my computer. I had to rely on an old Windows machine of my hubby’s. (Blech! I hate Windows). It had some settings that wouldn’t let me log in to e-mail or my blogs. I finally managed to see what had come into my e-mail account by way of my iPod. An iPod is not the easiest way to communicate by e-mail.
But now I can post a few drawings of an English bulldog owned by my son’s sweetheart. His name is Winston after the famous Winston and he is a wonderful dog. Winston has claimed my son as his boy in the same manner as Peabody and Sherman. (If you don’t get that reference your are too young.) Bull dogs look fierce but they are really very mellow and sweet. He was left with me and my hubby for the day and he became my model. He loved laying on the concrete floor in the garage because it was cool. My hubby enjoys having him around. He is a dog lover but can’t have dogs because he so allergic to them. An occasional visit by Winston is perfect for a dog fix.
It seems that most of the people I draw on the sly are less likely to move around than this very mellow dog. He changed positions quite often. Hence the multiple views in the first drawing. The views were challenging because of all the foreshortening of body and paws. The second drawing was outside but I placed him on the rug at the front door which is a favorite spot of his.
T F m