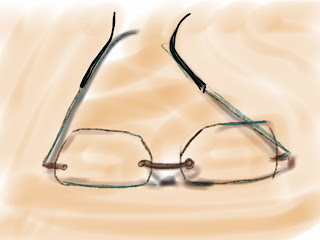 My Glasses
Digital Drawing, Size Variable
I bought myself a new toy. I bought an iPad. I have been having serious iPad envy for some time now and I finally succumbed. I have been playing with the drawing functions. It’s going to take some time to really learn the ins and outs of this. I am having trouble with the lack of precision of my finger tip. A stylus is not much better. But, I think I can master this. This one of my first keepers. I have had at least ten rejects preceding this modest success.
This app has layers. I need to make more effective use of them. I have such facility with painting that the layers and the constant adjustment to the “brushes” slow me down. I’m just used to laying down washes one after the other. Now I have to formulate a new strategy. It will be fun.
T F m

Paul with Bones
Ball Point Pen on Paper, 8.5×5″
I always talk or, in this case write, about whatever project I might be working on. When I was in graduate school and had a paper to write, I’d talk about it. I drove everyone crazy with the obsession of the moment. But I knew if I could talk about my topic in a coherent way, then I could write about it in a coherent way. This post and the previous post are exercises of a similar nature. I’m working out my next semester life drawing class on my blog. That’s what blogs are for aren’t they?
So what comes after a quick gesture drawing? More of the same but with the addition of a wider context. That means developing a pictorial space. Give the person or objects drawn a space in which they can reside. If you are skilled in drawing quickly that can happen in a very short interval. This drawing was done in about 20 minutes.
When in class,  I have the model gradually take longer poses. Over a fifteen minute time period the pose will last 15 seconds and be extended to 30 seconds. The next fifteen minute period might have the poses begin with 30 seconds and end with 1 minute. You get the picture. So this was done late in the class session and we had graduated to a full 20 minutes. By that time, the surroundings can be included with some detail. The surroundings, especially on what the model is resting, should be included in a single gesture at the very beginning of the drawing. I  draw with my students to keep myself from hovering. I remember having teachers hover over me while I was trying to draw and how unnerving that was.

This was done from the classroom desk in a position to the extreme right of the model. I included my best classroom assistant—Bones. Not only is the skeleton evocative but he is a reminder to all that people have bones and joints.

Gesture Drawings
Ball Point Pen on Paper, 8.5×5″
The semester has just concluded and I have posted my grades. I am already thinking about next semester. I am teaching life drawing. I have only taught it twice before. I have been teaching beginning drawing for eleven years so the tinkering for that is minimal. Life drawing is another story. I don’t have a very structured approach for that. I usually go into class with something planned but it seems I have so many deviations from the plan that the plan is moot. So much of it has to do with the group dynamic, or the needs of some individuals, that making changes quickly to meet them is required. So I am thinking about plans now hoping I can make some alterations in advance so I do not to have the feeling that I am flying by the seat of my pants.
The drawings you see above are gesture drawings. They are usually done quickly to begin every figure drawing. These were all done in three minutes or under.  Sometimes they are done in seconds. The faster the better. It prevents second guessing oneself. All the necessary information is there with the model. Not having time to be self-critical allows one to draw what one sees not what we know is there. It’s visual thinking not verbal/analytical thinking. Yes, the drawings can be crude, but the action is generally very well expressed despite the crudeness. It’s not necessary to show what the person looks like. What that person is doing is essential. The particular characteristics of an individual are refinements which come later.
The term gesture refers to the gesture of the model (what he is doing) and to the gesture of the artist as recorded by the marks which make the drawing. Both come together to make the individuality of the drawing. This is not an academic approach which emphasizes careful proportional measurement and analysis. The quick gesture usually gets the proportions just right at the outset. As soon as one neglects to do the quick gesture, the proportions fall apart. As soon as I allow more time, students will neglect to do the gesture thinking that quick drawing is not required and their careful attention to detail is the better approach. The results generally show how unhelpful an approach it is. After all what do I know? I am only the teacher and I’m only a geezer who’s been doing this for more years than I care to admit. Sooner or later they will realize that I did have some wisdom to impart.
T F m

I Hate Waiting So I Draw 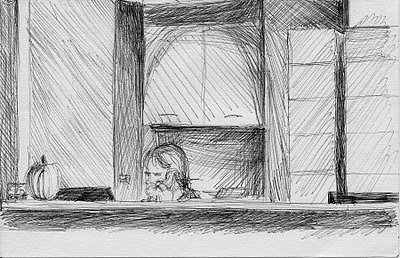 Reception Desk
Ball Point Pen on Paper, 5×8.5″
The older I get the less patient I become. I don’t know if it’s because I am more aware that my time on this earth is finite or if it’s because of the nature of our media. It’s flashing edits and continuous interruptions have made my attention span that of a two year old. All I know is that I hate waiting.
When I have to wait I keep myself busy with sketching. It fills the time. The magazines in the reception area have become so inane that I don’t want to bother with them. So drawing is a better way to occupy myself. Then I have something to share on by blog. This little drawing is the result of a recent visit to the dentist.
However, I have made it a rule that I will only wait for fifteen minutes and then I reschedule and leave. My time has some value too.  My dentist is particularly delinquent. I know that he encounters complications that may require more time but to leave clients sitting in the waiting room without notifying them is inconsiderate and rude.  So I refuse to wait anymore.
There is also the issue of forms. I hate filling out forms. I remember returning to a doctor within a week for a follow-up visit and the receptionist handing me the same epic novel-thick stack of forms that I had just filled out only a week before.
“It’s policy.” she said.

“My policy is I’m not filling them out again. Nothing has changed in the last week”, I said. I felt very proud to have refused such nonsense and to have saved some trees.

Green Wall Paper
Oil on Panel, 11×14″
This is a one session painting. That is why it is smaller than my usual 16×20″ sized paintings. The extreme foreshortening is a direct result of unexpectedly heavy Saturday morning traffic. Traffic around the Chicago area can be horrendous especially during rush hours. We often say we have two seasons: winter and road construction. Well, I encountered road construction. It made my trip a nightmare.
I live outside the city and when I come into the city it is usually for the Saturday painting sessions. If I leave the house around 9am, I have no problem getting to the studio on time. But the Illinois Department of Transportation (IDOT also known as IDIOT) decided to close two of the three lanes on the my route to the studio. I had to take the labrynthian way to pick my way around traffic that had been diverted off the expressway (express my tush!). I even left the house earlier than usual and still got there a half hour late.
In addition, the group was larger than usual. It’s first-come, first-served in staking out a spot for painting. This view was all I could choose. Reclining poses are challenging enough, but when they are as extremely foreshortened as this well, sheesh! At least it was Janet of the red hair and porcelain skin.
So even with three paragraphs of whining, I think this came out OK. A likeness was out of the question because of the view and the time constraints. The green wallpaper is a total invention that goes well with the red hair. The quality of light is to my liking as well. That’s my story and I’m sticking to it.
T F m