Spring Painting Is On My Mind

Spring Forest
iPad Drawing/Pad, Size Variable
Though the extraordinarily warm weather of this month seems to be behind us, and more typically cooler weather has returned, winter is definitely no longer on my mind. Spring has supplanted winter in actuality and in my head. This iPad digital work was provoked by a visit to the main campus of the college where I teach. It is located in the woods of the forest preserves of Cook County.
The forest is mostly oak forest. The leaves are slower to emerge on these oak trees than the other trees that are now almost completely leafed-out. The forest floor is covered in new green foliage that was stunning to see. It is a mist of greens in varying stages of yellow to yellow green. With the top canopy largely absent, the sun shown through to the ground to foster this explosion of growth.

It was magical and beautiful. This cannot begin to capture it. Photography can’t capture it either. The experience of it can never be reproduced after the fact. I can try to capture the feel of it but never the experience. Oh, well!

I Teach. We All Draw. 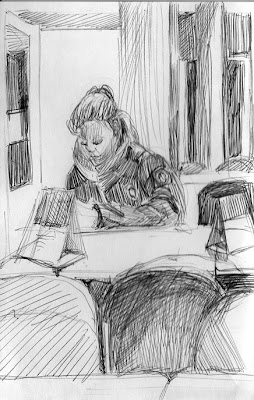 Texting
Ball Point Pen on Paper, 8×5.5″
This was done a few weeks ago. The model we had scheduled for my life drawing class did not arrive so we went out into the lunchroom to draw whoever was hanging out between classes. This young lady was busy texting.

The text mavens are all very good to draw. They are so intent on what they are doing they remain very still. It’s almost a trance state. I don’t really know how healthy all this digital activity is for them, but it’s good for me as an artist.

Winter Is Still in My Drawing Eye

Winter Fields
iPad Painting/Drawing, Size Variable
I did this while in Florida also. I had been thinking about it for some time. I had been coming home from Wisconsin and it had snowed lightly the night before. It was just enough to fill the low spots between furrows of the freshly plowed fields. There was no green to be seen. There was only the subtle beauty of winter neutrals and their slight shifts in temperature. The stripes of the fields caught my eye instantly. I am such a sucker for stripes! The undulation of these stripes just hit my happy spot!
The weather has finally returned to a more typical 50℉ range. It raining and very gray outside. We need the rain as we are short on precipitation with the lack of snow. So a couple days of rain will replenish our water table.
T F m

At the Side of the Road
iPad Drawing/Painting, Size Variable
I think the title describes this very well. It was done from my memory of a small stand of trees seen from the car. There was a large stand of trees behind them and a large cumulo-nimbus cloud in the sky.
This iPad drawing precedes the drawing of the previous post. That stand of trees was right outside our door so I could refer to it while I drew. I saw this only briefly. My memory of it at the time was fuzzy. So I made a lot of stuff up.
The app I use has the feature of layers. I can create nearly as many layers as I want. I still have a hard time thinking about them while doing the drawings. To me, the iPad is just like a piece of paper and I draw in it that way. The layers can be a real boon to the execution of the drawing. I can draw my way out of the thing by going from background layers to foreground layers. That is, if I remember to add a layer and the remember which layer I am drawing on.
I have been using a computer for graphic design for 20 years. (I can’t believe it’s that long! Am I a geeza!) Even so I never really learned the drawing programs that well. By the time I was done farting around trying to draw on the computer, I could have drawn the thing 10 times and been long done with the image, had it scanned, and placed in the document. So now the iPad is forcing me to catch up.
Using the apps on the iPad is much simpler and they are easier to learn. That simplicity makes this digital realm no different than any other drawing material. I think that is why I am enjoying working with it. But I still have to make an effort to think about the layers.
T F m

I Have Been Away

Florida Trees
iPad Painting, Size Variable
I have just returned home from a spring break visiting friends in Florida. The whole time my hubby and I were gone it was 75—80℉ in Chicago. (It was the same in where we stayed.) To say that’s extraordinary is an understatement! Temperatures usually hover in the 40℉ territory at this time of year. Chicago has had the warmest winter in my memory. No sub-zero temperatures. What snow we had was slush soup or melted in days. Our February had many 50℉ days. It’s been a flabbergast! Go figure!
I came home to forsythia in bloom. My honeysuckle and flowering crab are well into the process of producing leaves. This is 5-6 weeks premature. I only hope a sudden frost will not take its toll on the products of this bizarre weather.
Having said all that, my little Florida, pine tree iPad painting/drawing seems an anti-climax. The area of northern Florida we visited is known for pine tree farms used for paper pulping. These pines were not available to the paper mills by being in a residential area. They are very tall and thin trunked. They shed their lower branches as they grow so all the needled branches are in the tops of the trees.

I have more of these and some low-tech paintings/drawings to post so visit again soon.

The Beautiful Janet of the Red Hair

Brown Drape
Oil on Linen Panel, 20×16″
Janet models for us often. Both she and we look forward to our sessions together. She is entertained by our banter and we are delighted by her beauty as a person as well as her beauty physically. It truly is an artistic collaboration.
She knows Eleanor, our studio host, so well that she asked whether she should stick out her tongue for one of Eleanor’s surreal drawings. Eleanor is doing a series on Lilith as the ancient Sumerian deity and as the bad girl of Jewish tradition. Lilith is purported to have been Adam’s first wife but she refused to submit to Adam’s will sexually. Her punishment for such impudence was to become a demon. She gets a double demotion from deity, to human, to demon. I think her position as demon is preferable to the position that would have been imposed upon her as Adam’s chattel.
Considering that Janet was a little bummed-out over a relationship issue, the myth of Lilith seemed apropo. She looks as sad here as she felt. She was angry over the situation as well. She is one feisty woman and we approve heartily.
T F m